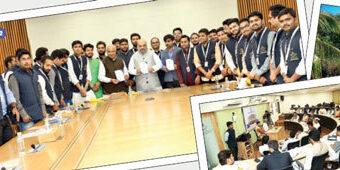 The Indian Institute of Democratic Leadership (IIDL) in Bhayandar, operates out of a 14-acre campus, located just off the road that leads to Essel World. IIDL seeks to create a new kind of politically aware leadership that is educated, has a practical grasp of India’s politics and is aware of the socio-political issues facing India, through a nine-month course in “leadership” for aspirants, who seem to be of only one kind.

The institute does not admit so, but the leaders it produces find takers in only one party, the BJP. They speak the language that is heard in the Sangh ecosystem.

On the day Mumbai Mirror visited the campus, interviews were being conducted in one of the halls for the next batch. The institute was also organising a group interaction with about a dozen students from the first batch (from 2017) who are visiting their alma mater. The age group ranges from 24 to mid-40s. We sit down to hear their thoughts on the 2019 election results.

The 2017 cohort gathered in the room features many who are fresh out of the experience of having fought elections from the trenches, Assembly and parliamentary, and from different parts of the country.

“This country runs on emotions. Wherever Modi goes, he connects with people’s emotions. This election, the voters did not elect a Parliament. They directly elected a supreme leader,” says Ravi Soni, a 26-year-old political activist from Jhabua in Madhya Pradesh.

“After 1965, the Congress focused entirely on ruling the country and outsourced the teaching of history to the Leftists. There are no records but this is obvious. They made Akbar The Great a father figure to India when in fact he is not an Indian,” says Anurag Pandey, a 30-year old from Bhopal, who worked with a private bank before joining IIDL.

Anurag also feels the minorities are not “nationalist” enough, and not just in India but worldwide.

His batchmate, Aditya Chapra, 24, from Jabalpur, equates the NCERT textbooks to fake news ideologically designed to promote Congress at the cost of the Sangh.

Twenty-eight year old Aritra Chattopadhyay, now a political consultant with the BJP in Bengal, feels secularism was used to malign one community (Hindus) like the Periyar movement attacked one caste (upper castes) in the South.

These replies and views are not just uncritical but they also unequivocally toe the line of the ruling BJP and Sangh affiliates.

IIDL, which began in 2017, claims to be “thoroughly professional and non-partisan in its politics”. A claim that is somewhat undercut by the fact that its parent organisation

Rambhau Mhalgi Prabodhini (and owner of the campus) is named after a BJP leader, who in 1982 founded RMP to realise the vision of Deendayal Upadhyay — an RSS icon who launched the organisation’s weekly mouthpiece Panchjanya in the 1950s and after whom the RSS named its think-tank Deendayal Research Institute.

The lush campus is modeled after a sprawling conference resort that includes a helipad, swimming pool, open air amphitheatre, a big conference center, plush guest rooms and an upcoming museum dedicated to Deendayal Upadhyay, also home to a modern gaushala.

Last year, the campus played host to the annual gathering of the RSS called the Akhil Bharatiya Karyakari Mandal where the Sangh reviews the progress of its various operations. RMP hosts IIDL by providing accommodation to its students, the use of its cafeteria and one of its well-designed lecture rooms.

Most students come already initiated into Hindutva ideology either through their own family, or through the RSS and its affiliates like the Akhil Bharatiya Vidyarthi Parishad . A majority of them also come from political families from small cities and towns.

“The institute’s mandate is to strengthen through addressing the human resource development crisis. It is not a factory producing politicians. This course will help in producing institutional leaders, association leaders and even just a housing society leader. The dearth of leadership is there for everyone to see,” Sahasrabuddhe told Mirror.

To these students, politics is first and foremost about gaining and keeping political power. Politics and party politics are one.

There is no curriculum and 95 per cent of the faculty comprises guest lecturers like filmmaker Vivek Agnihotri, journalist Arnab Goswami and members of the Forum for Integrated National Security, a city-based think-tank.

There are no textbooks or technical grounding in theory or references to canonical scholarship from established areas of study. Terms like “democracy”, “governance”, “ideology” and “politics” are stripped of their technical definitions and intellectual histories. Lectures are often accompanied by PowerPoint presentations for intellectual training in Politics and Democracy or Governance and Public Policy – focus of two of the three trimesters.

What is, however, unclear is how a training course on something as complex as the political, cultural and historical reality of India taught through slides, drawn from an alternative intellectual universe that dismisses everything outside it as false, can plug this lacunae in informed and educated leadership.

The BJP has been ahead of the curve in attracting not just the young voter but also, with help from the RSS, a young political cadre. The IIDL student group that Mumbai Mirror met with seems headed to a career in politics either with the BJP or as part of its ecosystem. The picture they present then is perhaps a snapshot in the continuing development of a future BJP leadership, whose first formative experience in politics has come from obscuring the difference between truth and fiction.

The institute’s mandate is to strengthen democracy through addressing the human resource development. It is not a factory producing politicians
–Vinay Sahasrabuddhe, BJP leader