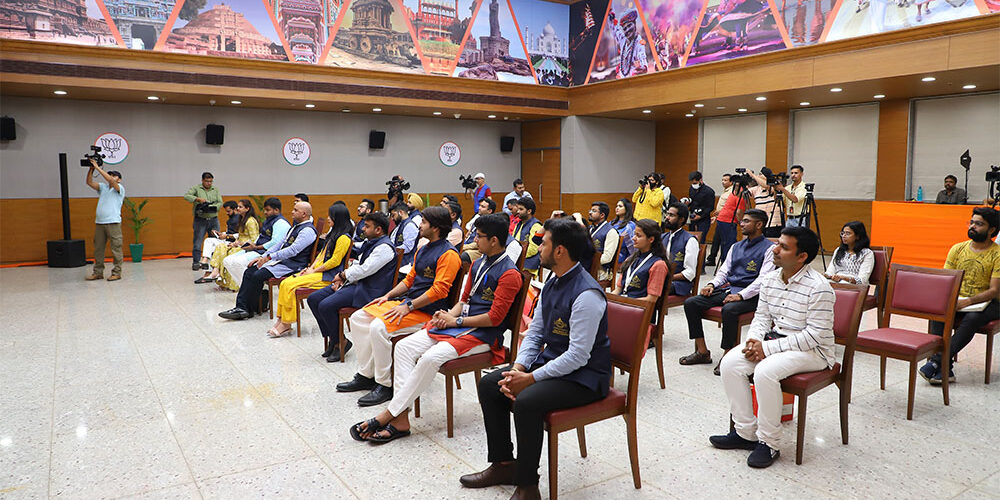 One of the determinants of a protest’s success – or failure – is how conspicuous it is… or isn’t. That there was a protest against the Citizenship Amendment Act at Mumbai’s August Kranti Maidan on Thursday was palpable at Grant Road station itself, where protesters took to sloganeering and marching in files. Simultaneously, another protest (gathering or rally is more accurate) was taking shape only three stations away, in support of the Act, condemning the alleged spread of misinformation by “vested interests”.

It took me 30 minutes to find this gathering, which was scheduled to take place at Churchgate station, and was later shifted to the Chhatrapati Shivaji Maharaj Terminus.

Squeezed between food stalls and an underground walkway was this gathering organised by the Indian Institute of Democratic Leadership (reportedly set up by an RSS-affiliate) and multiple student groups; the word ‘ABVP’ was uttered twice by individuals present, never to be repeated again when I wanted to confirm the student outfit’s participation. The police said they estimated this was a group of around 50 to 70 people, and that they were scheduled to stay there for an hour-and-a-half. The group was made up of students as well as people in their 30s, 40s and 50s.

This gathering, and the larger endeavour of which it is a part (represented by the hashtag #MumbaiwithCAA on Twitter), was announced after the word of the August Kranti Maidan protest was out; many said that it was an attempt to confuse protesters who were to come to August Kranti Maidan — a smokescreen. This was far from accurate, as I would realise a mere five minutes later.

The points raised at the gathering were specific: “NRC (National Register of Citizens) abhi baaki hai”, “PoK baaki hai” and “Modi-Shah sangharsh karo, hum tumhare saath hai” (one poster said that people’s inability to see Prime Minister Narendra Modi as a great leader stemmed from their concern about only themselves and petty politics). The pamphlets that were being distributed were meant to dispel “myths” about the CAA — about how it is anti-Muslim, that it is against the interests of the indigenous people of Assam, and that common people were protesting against the Act.