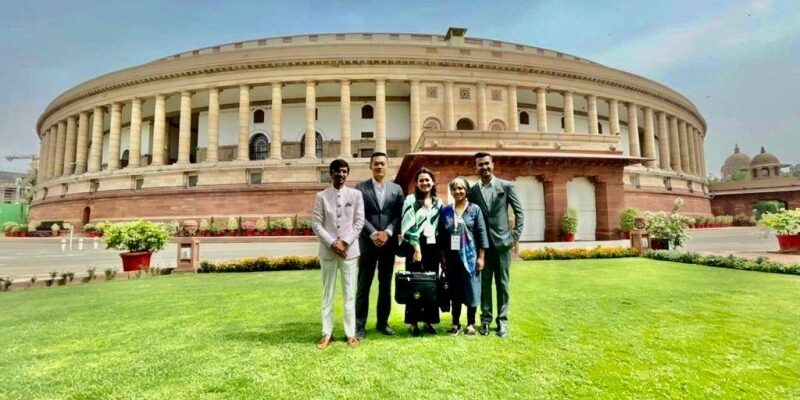 At least five young Nepali social entrepreneurs and leaders have been visiting India to get a comprehensive idea of the southern neighbour’s rich democratic culture.

According to the participants, young leaders from Bangladesh, Brunei, Ghana, Norway, and Peru are also at the event which is being held from May 20-29. ICCR is an autonomous body under India’s Ministry of External Affairs, which deals with policies relating to India’s external cultural relations. Gen Next Democratic Network as a program in which ICCR is inviting young leaders below the age of 35 from 75 different democracies.

According to ICCR, five young Nepali leaders are part of the second group of young leaders under the age of 35, being hosted by India while the first group that was hosted in November last year was from Bhutan, Sri Lanka, Chile, Japan, Indonesia, and Zambia.

Before departing for Mumbai, Nepali youth delegation visited the Indian parliament and participated in different discussion sessions. On May 21, the team attended a seminar entitled ‘Indian Democracy: Success, Challenges and Way Ahead’ at Parliament, New Delhi which was addressed by Prof. Ajay Kumar Dube from Jawaharlal Nehru University.

Among the Nepali participants, Sonam Sherpa is the director at Yeti Group, who has also been involved in the hospitality and tourism business for several years. Aayushi KC is the Founder and CEO of Khaalisisi Management Pvt. Ltd., a waste management platform that currently connects more than 13,000 recyclable waste-buyers to waste-sellers, helping to substantially increase the diversion of recyclable materials away from landfills.

Diwesh Bothra Jain is the executive director at JD Group, a business consulting firm and overseas educational firm based in Kathmandu, with several years of experience in both the fields. Asish Thakur is the co-founder and executive director of Glocal whose mission is to empower & build capacity of Nepali teenagers. Manushi Bhattarai, a political activist, as well as a central committee member of Janata Samajwadi Party, is the daughter of former PM Baburam Bhattarai and ex-minister Hisila Yami.

The team visited Taj Mahal and Artisan’s art centre at Agra on May 22 while the delegates attended a session on ’75 Years of Indian Independence: Swaraj to Suraj’ addressed by Prof. Santishree Dhulipudi Pandit, Vice Chancellor, Jawaharlal Nehru University at Oberoi Hotel on May 23. On the same day, the delegates took part in the programme entitled ‘Antyodaya: Welfare and Empowerment of the Marginalised and Women’ which was addressed by Prof. Sushma Yadav, Members of the University Grants Commission & Former Vice-Chancellor Bhagat Phool Singh Mahila Vishwavidyalaya Khanpur Kalan, Haryana. According to ICCR, the team also visited Vivekananda International Foundation for roundtable discussion.

After attending the lunch hosted by MeenakshiLekhi, Minister of State for External Affairs, Ministry of External Affairs, New Delhi at Sushma Swaraj Bhawan, the team visited Kathak Kendra, Indian Institute of Delhi and Light and Sound Show at Red Fort on May 24.

The team also visited Raja Dinkar Kelkar Museum and Films and Television Institute of India as well as Maharshi Karve Stree Shikshan Samstha, (MKSSS) in Pune on May 25. “The team also visited Pune-based Bhandarkar Oriental Research Institute and Hiware Bazar, Ahmednagar which was selected as a model village by the Maharashtra Government after launching the Adarsh Gaon Yojna in 1995,”it added.

On May 28, the team is scheduled to visit Elephanta Caves and Mumbai College of Hotel Management and Catering Technology in Mumbai. The team will wrap up their visit by calling on with young/senior ministers and leaders of India on may 29, according to ICCR.